How Much Is a Dub of Weed?

As weed culture has evolved, so too have weed slang terms. Perhaps you have heard the common slang terms including pot, dope, ganja, grass, and many, many more.

Just like how various terms relate to weed, there are also different slang terms used to express the price and quantity for which you want to buy.

Certain parts of the United States have legalized cannabis and it has changed the way people buy weed. If you are buying from a medical or recreational dispensary then you will purchase weed using the measurements of either grams or ounces.

You may already be familiar with the measurements of an eighth, quarter, and half. These terms 2are still commonly used today. Back when cannabis was illegal in all states, much like it still is federally, there were slang terms that people would call different quantities of cannabis to keep things discreet.

What is a dub? 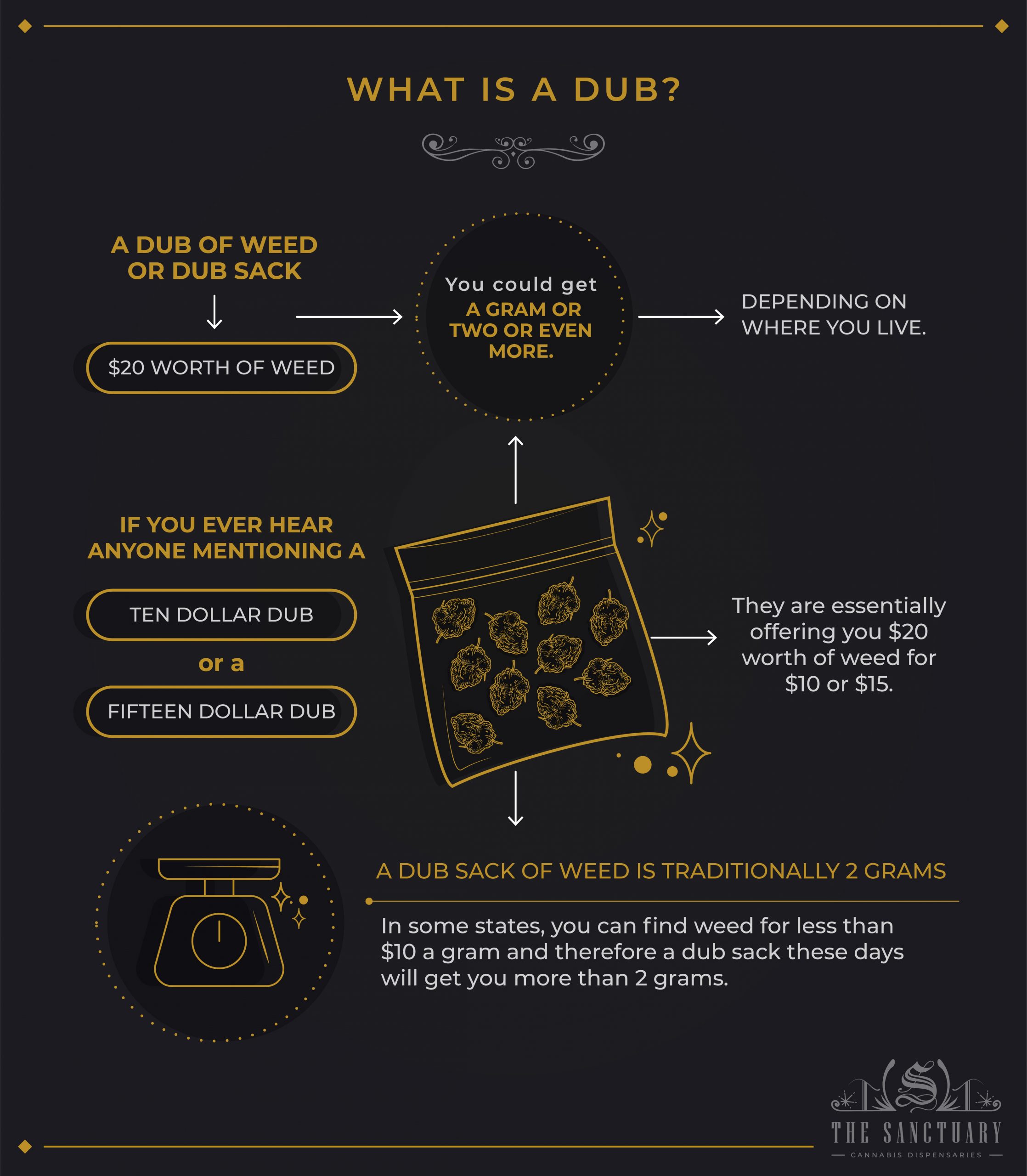 A “dub of weed” or a “dub sack” is slang that refers to $20 worth of weed. This could mean you would get a gram or two or even more. Weed prices have always fluctuated so how much you get in a dub sack will depend on where you live or who you are getting it from.

The term comes from what people would call wheels or rims that were 20 inches in diameter. At some point, stoners decided to use this covert term to buy a $20 sack without anybody realizing what they were talking about. Again, slang is especially useful for places that still criminalize cannabis or when you purchase it from the black market.

If you ever hear anyone mentioning a “ten-dollar dub,” or a “fifteen-dollar dub” then they are essentially offering you $20 worth of weed for $10 or $15.

How many grams is a dub of weed?

A dub sack of weed is traditionally 2 grams. However, as the cannabis market has changed so too have the prices. In some states, you can find weed for less than $10 a gram and therefore a dub sack these days will get you more than 2 grams.

If you are purchasing cannabis from a dispensary, a dub would come out to anywhere from a gram or two. On the black market, however, you could get up to a quarter of not great but still useable weed.

For example, if you go to New York to purchase a dub sack on the streets it will cost you way more than if you bought it in Colorado or Oregon. Part of it is due to legality but it also has to do with the unpredictable black market economy.

The greater the quality of dank you can get your hands on will also determine how much a dub will cost. If you only get a gram for $20 then it should be some nice, potent bud. If you get more than an eighth for $20 then do not set your expectations too high.

Is a dub sack just a black market term?

If you go into a legal dispensary asking to purchase a dub sack, the budtenders may give you a confused look. Even if they know what the term means, it is not how cannabis businesses like to price their product.

You may also find that in most instances dispensaries prefer not to use derogatory cannabis slang. Certain dispensaries may prefer you use the word flower instead of weed or pot for example.

So yes, a dub sack is purely a black market term, and using it at a professional weed business may seem like a faux pa or it may be passed off like nothing at all. Either way, it is not commonplace in dispensaries.

As the legal market for cannabis increases, it is quite likely that these terms will become obsolete. Unfortunately for cannabis reform, that might not be for a long time.