How to Roll a Paper Cone

Pre rolls and rolling machines have changed the game of rolled joints since they first hit the market. While rolling the perfect joint is both the best skill and party trick of every smoker’s arsenal, any way to ease the process only makes it better. Such is the case with paper cones: These are the apex predator of RITs (Rollers in Training) across the country because they are so easy, that you could actually get a perfect joint on your very first try.

What are Paper Cones

Made of a rolling paper just like any other brand, paper cones are a step between fresh joints and pre rolls: Papers that are already rolled into the shape of a cone (hence the name). Pretty much all other papers, as great as they are, come in one flat shape whereas cones are a lot closer to that joint shape that you are more familiar with, typically the perfect size for a gram.

Sounds awesome, right? Because they are. It was already easy to roll a paper anytime you have a flat surface and a steady hand, but imagine that the ‘rolling’ is already done for you and you just load it up: That is the beauty of paper cones.

RAW, ZigZag, Cyclones and many others produce cones at prices that are in a way, very comparable to papers or pre rolls: Think of it as paying a little more than regular papers with the added value of them being rolled, or cheaper than a pre roll since you finish them at home.

But either way, you definitely get your money’s worth with any brand of paper cones.

How to Roll a Paper Cone 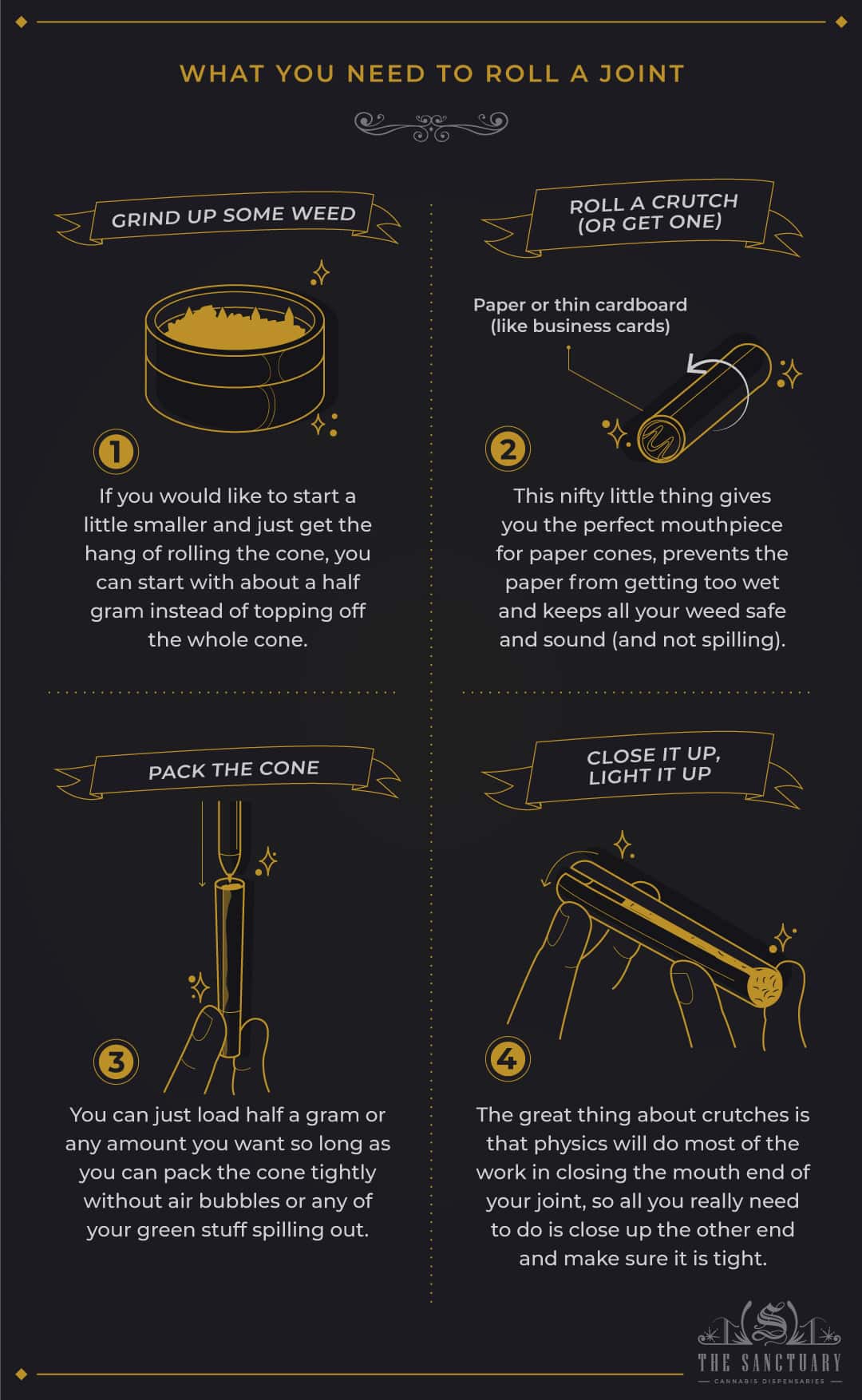 Rolling in general is easier the more you do it, and it might even come naturally to you without having to practice very much: Rolling a paper cone is certainly no exception. If the process involves any initial practice at all (it really is that easy to where you might not even need it), you will be taking the first hit from your first paper cone very shortly after.

Step 1: Grind Up Some Weed

Grinder or no grinder, we are going to start with the universal ‘Step 1’ for all rolling: crushing and grinding your weed. Your pre-rolled cone may have a mouth open so you can funnel in the green stuff, but it still has to be grinded up enough to fit inside.

If you would like to start a little smaller and just get the hang of rolling the cone, you can start with about a half gram instead of topping off the whole cone. But again, it is extremely simple to roll a paper cone, so even that should take no time.

The only crutch that is not a crutch (pun intended) is the one you put on the end of your joint. This nifty little thing gives you the perfect mouthpiece for paper cones, prevents the paper from getting too wet and keeps all your weed safe and sound (and not spilling).

Now, you need something to fill your cone with, otherwise we are just going to be smoking papers and nobody wants that. So do yourself a favor and funnel in the weed that you grinded up (maybe throw in some hash if you want to make a homemade infused joint).

Again, a lot of cones are that standard factory size, which are able to hold up to a gram of weed, but it can depend on the brand, the size you bought or just how much you pack into the cone. You can just load half a gram or any amount you want so long as you can pack the cone tightly without air bubbles or any of your green stuff spilling out.

The great thing about crutches is that physics will do most of the work in closing the mouth end of your joint, so all you really need to do is close up the other end and make sure it is tight.

It may look a little bit nicer and neater, and provide comfort in knowing you cannot spill anything, but you do not even have to close the joint if you plan to smoke it right after you roll. It is more of an old-school presentation too, so that might just be your preference. Either way, the process ends with smoking weed, so it is very hard to complain.

Should I Roll My Own Cones?

If it is better for you economically, absolutely. Papers already come in packs and you likely have some now, so if you have some time on a weekend or a slow day working from home, this is prime time for you to take a few crutches and essentially make your own pre rolls at home.

Making homemade cones is not only great for you to practice your rolling for regular papers, but this is perfect and super easy prep for your next smoke session. You would save so much time if you have to roll a few joints for a small get-together, and this would be the best way to go.

Are they Easier than Joints?

If you could not already tell, paper cones are easier than rolling joints. Because cones are already sold and pre-packaged in the shape of a joint, you save most of the time and effort it takes to roll one yourself.

The abridged version of the steps to rolling a paper cone is to literally load up the cone, close it and take a hit: That’s it. The best way to close it up and get the perfect dispensary-quality pre roll at home is to hold it using a crutch before sealing the upper end of the joint.

Whether you consider yourself a master roller or a rolling novice, pick yourself up some paper cones and be only a couple steps away from beautiful at-home joints.