By The Sanctuary Editorial TeamLast updated on August 15, 2022No Comments

No matter your age, you have probably heard the same things about weed being an herbal medicine or some kind of ‘gateway drug’ for as long as you can remember (or at least before the last decade with more legalization). We have almost all seen or heard of weed being the latter and what it does to your state of mind, but even the most passionate canna enthusiasts might draw a blank on the origins of green stuff.

How exactly was weed discovered? Was it an accident? Was it even meant to be consumed the way it is now? All of these questions have vaguely contradicting answers (in terms of function), but they are nonetheless pieces to the whole puzzle.

What is the most common use for weed?

Not every single ounce of weed is used for the exact same purpose because it is such a versatile plant, but when you say ‘weed’ or ‘cannabis’ to anyone today, smoking or consumption is the most common correlation by far. Consuming weed in all its various forms is how it is mostly portrayed in the media and in societal nomenclature, so that would naturally become its most common use.

Alternatively, weed has also been widely used as an herbal medicine for thousands of years (still consumed orally but for completely different benefits), hence why it still reigns supreme as a medicine or natural treatment to this day. Unfortunately, weed would not make its way into grocery stores as a seasoning herb, but it was regularly consumed as a source of fiber back in 17th Century Europe.

The legend who legitimately first discovered weed is more than likely lost from the history books because they died…28 million years ago. That is actually when the oldest presence of weed has been recorded thanks to pollen studies. As far we’re concerned, it has aged beautifully!

But as we all know, weed grew (sorry) from this relatively unknown plant into the cornerstone of a massive industry and medical innovations. Much has been documented about the plant’s origins over the course of history, so this is a brief chronology of how weed was discovered.

The plant itself may be much older than originally thought, but it nonetheless dates back to the ancient Tibetan Plateau. When archaeobotanists began examining the grains of cannabis, there was some confusion because of how similar it was to other grains. They eventually found it to be of a separate genus and used (originally) as an herbal medicine.

What is commonly considered to be the ‘birthplace’ of weed, it did eventually make its way to Central Asia (most notably, China), where its use was so far innovated, that most of it is how we use weed today. Before anesthesiologists, there was just weed. It was the virtually the only anesthetic for surgeries at the time, but that does not sound like a bad thing.

Outside of consumption or medicine, this would also be when hemp cultivation would begin for making clothes and oils. Not only that, but rituals including weed (mainly burning seeds) would take place across Central Asia, and it was revered as one of the herbs for anxiety.

Moving several centuries forward to around 2000 B.C.E., Indo-European nomads may have been responsible for migrating weed to the Middle East and Central Europe.

Fun fact: If you have ever wondered if the Vikings ever got high (for reasons you do not have to explain), we have news for you: Cannabis seeds were found on Viking ships as far back as the 8th to 9th centuries. Granted, it could have been for literally any other purpose (we don’t actually know), but it is fun to imagine Vikings toking up after a long day of pillaging.

Throughout its history, weed arriving in the Americas was really the final step to fully realizing a ‘weed culture,’ even though it would not actually form for another century. It continued to be used primarily for hemp production in the 1700s, before a few..curious minds thought to consume it in an alcohol or by smoking, so you could guess that this made it very popular.

Between dedicated enthusiasts in both Mexico and the United States, there was not enough prohibition in the world to keep it from being completely inaccessible, or from said enthusiasts creating the ‘counterculture’ that became synonymous with weed.

When Was it First Brought to America? 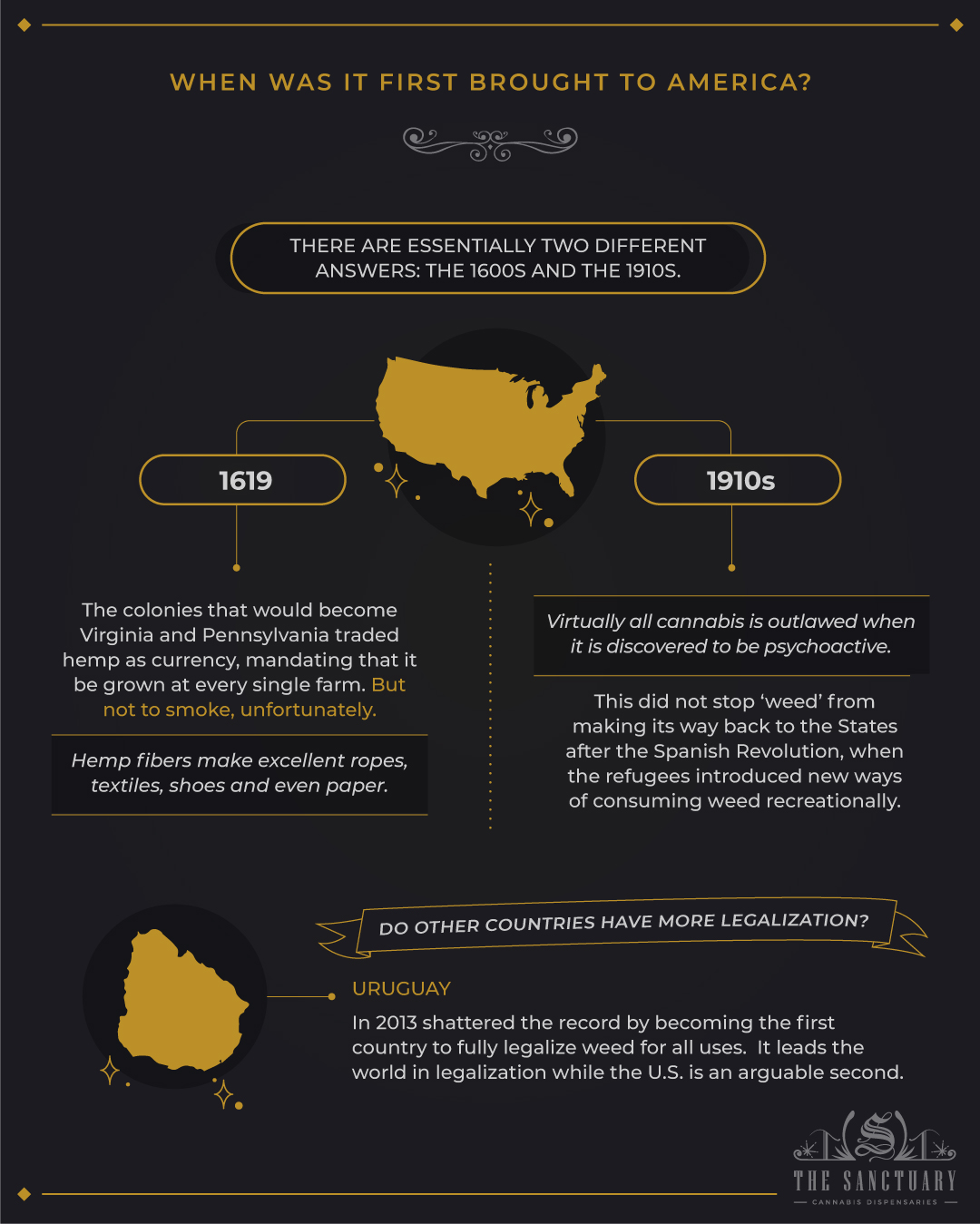 With an arguable influence across the Western world (from its history with legalization), the United States has and continues to play a significant role in cannabis culture. Because of this, we are left to wonder how it actually found its way to the States, and there are essentially two different answers: The 1600s and the 1910s.

That’s a bit of a time jump, right? But the reason for it is pretty interesting: In 1619, the colonies that would become Virginia and Pennsylvania traded hemp as currency, mandating that it be grown at every single farm. But not to smoke, unfortunately. Hemp fibers make excellent ropes, textiles, shoes and even paper. So, for ease of production and to boost a brand new economy, the colonies needed a system of hemp production.

Fast forward nearly 300 years, U.S. manufacturing shifts almost entirely from hemp and virtually all cannabis is outlawed when it is discovered to be psychoactive. However, this did not stop ‘weed’ from making its way back to the States after the Spanish Revolution, when the refugees introduced new ways of consuming weed recreationally. But over the next century, the prohibition would garner interest and new research would support it medicinally before it starts to become legalized in 2012.

Do Other Countries Have More Legalization?

The U.S. might have made a worldwide milestone in 2012 by having two states legalize weed for the first time, but just one year later, Uruguay shattered the record by becoming the first country to fully legalize weed for all uses. A handful of European countries may have higher possession limits than some states, but for the most part, Uruguay leads the world in legalization while the U.S. is an arguable second.