We have all experienced a nosy roommate or neighbor who makes getting high peacefully quite difficult. Although adult-use cannabis is legal in several places throughout the country, not everyone is enthusiastic about being near it.

Dabbing has grown in popularity over the last decade as extracts and concentrations have been more widely available. You undoubtedly have a lot of questions about dabbing if you are new to it. If you are searching for a new way to get high that does not require smoking cannabis, you might be asking if dabs emit a smell?

Dabs are concentrated dosages of cannabis that come in a variety of formats and are made from cannabinoid extracts. They are usually made by using a solvent to extract THC, CBD, or other cannabinoids.

The result is a sticky, powerful material that can be heated on a hot surface to produce vapor that may be inhaled. The majority of individuals dab with a dab rig.

This dab accessory looks like a bong or bubbler but is particularly designed to hold dabs. The vapor is breathed through the mouthpiece after the concentrates are heated on a nail. The important term here is vapor.

When cannabis extracts are heated on a dab rig, they become so hot that vapor is produced. They do not, however, become so heated that they burn and emit smoke. Because there is no smoke, many people assume that dabs are odorless. However, this is not always the case.

Dabs have a faint cannabis scent, but they will not stink up the room as much as dry herb if kept confined. Depending on the sort of concentrate you have, working with dabs might have a slight odor. Softer dabs, such as budder, have the most odor, whereas crumble and shatter do not have as strong of a smell until they become heated.

You will probably detect the scent of the hot coil and the exhaled vapor during your session. The scent is not as pungent as the dried flower vapor, but an oil pen is less strong and dissipates quicker.

Another common technique to dab is via a rig, which has a stronger odor than a dab pen because of the larger clouds that are exhaled. The butane gas in a conventional rig may contribute to the odor, but this is not the case with electric dab rigs and pen-type vapes.

The pleasant scent of cannabis will be noticeable once your flower vaporizer achieves temperature. Conduction is the most common mode of operation for portable vaporizers, and they can emit a strong odor.

Because the herb is not directly contacting the heating element, most tabletop vapes employ convection heating, which produces less odor.

The “lightly toasted” temperature level is generally the greatest for vaping cannabis and minimizing odor (325-350 degrees F). To keep the stench from lingering, exhale near a window. After vaporizing, the room should be left to air out for about 20-45 minutes.

The smallest amount of stench is produced by THC oil cartridges. Depending on the size of the hit you exhale, they still emit an odor. If you take a few little puffs and blow them directly out the window, you will notice a slight terpene fragrance before it goes away.

Simply opening a freshly made bag of popcorn will hide this. It will be more noticeable if you are taking large rips and are not near a window. Fortunately, the odor of vaping concentrates dissipates faster than that of flower or dabs.

It is worth noting that, regardless of THC concentration, certain full-spectrum CBD vapes and delta 8 carts have a similar fragrance. Vapes and liquids based on isolates, not so much.

Methods to reduce the smells of dabbing 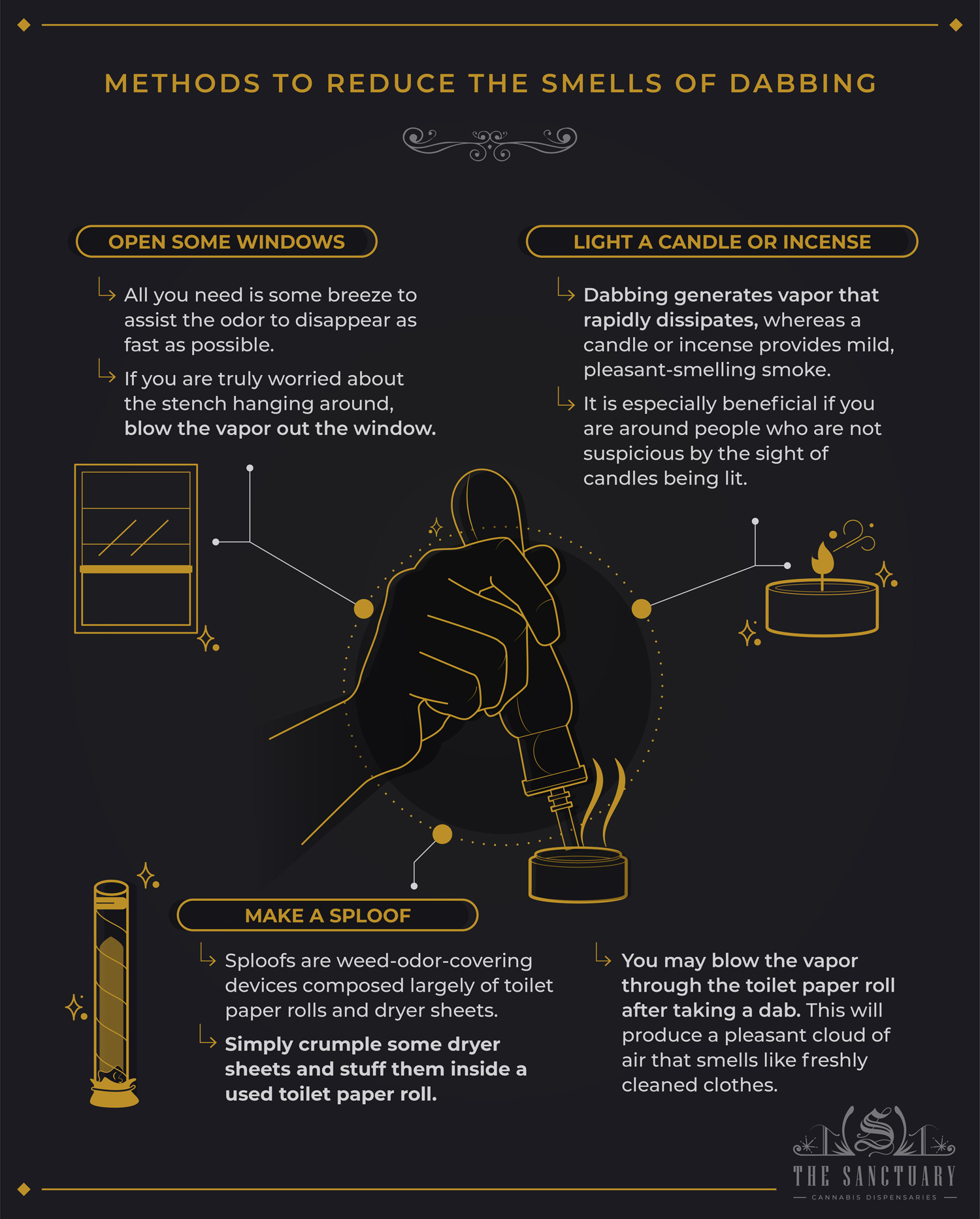 There are a few techniques to decrease the scent of dabbing, whether your neighbors are not particularly weed-friendly or you have other reasons to keep your dabbing out of sight and smell.

You would have to put in a lot of effort if you wanted to smoke a joint in a room without anyone noticing. Opening a window is a good start, but it will not get rid of the odor completely.

If you are dabbing, opening some windows will go a long way. All you need is some breeze to assist the odor to disappear as fast as possible. If you are truly worried about the stench hanging around, blow the vapor out the window.

Light a candle or incense

Dabs certainly have a distinct odor. However, it is not nearly as powerful as smoking flower. Lighting a fragrant candle or incense while dabbing away in your bedroom is a smart way to go if you are trying to be courteous.

Dabbing generates vapor that rapidly dissipates, whereas a candle or incense provides mild, pleasant-smelling smoke. This may help mask some of the residual dab odor, and it is especially beneficial if you are around people who are not suspicious by the sight of candles being lit.

Making your own sploof may set your mind at ease if you are serious about masking the dab odor. If you already have a window open and candles blazing, the odor will most likely dissipate quickly without your intervention.

You may blow the vapor through the toilet paper roll after taking a dab. This will produce a pleasant cloud of air that smells like freshly cleaned clothes.